With a little help from our friends. . . 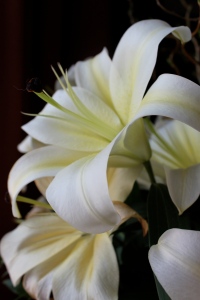 There is a wedding this weekend.  Our daughter and her fiance are getting married on Saturday.  There will be about 125 people in attendance.   We are hoping for good weather.  The forecast says it might be a little on the cool side.  The trees have certainly put on their best wedding attire.  It has been a gorgeous Fall thus far in the mountains of North Carolina.

We have some good friends that live in Longview Texas now.  They moved some years ago from the verdant green mountains of North Carolina to live closer to other family members.  The man, I will call Chuck and the wife Ellen. They are a retired couple with grown children of their own.

Chuck volunteered to teach our son about computers years ago.   I have tried to remember how old our son was at the time, but for the life of me I can’t remember.   Every week, Chuck and Ellen would host us for an hour or so at their house.  Our son and Chuck would go to the computer room and there learn about HTML codes and Linux.  Ellen his wife all-the-while would be baking fabulous chocolate chip cookies for the college group that would meet at at our church student center that night. I got to have a preview of the cookies served hot along with a frothy cappuccino.   On top of her baking expertise Ellen is also an extremely accomplished seamstress.  So, while enjoying her cookie, my daughter would be scouring the bridal magazines that Ellen had.

Our daughter has had wedding plans for years thanks to Ellen and Chuck.

I don’t how many wedding dresses Ellen has made.  She is meticulous in her craft and motivated by her love by the brides she serves.   Her husband Chuck wrote to tell us after our son died, how much he loved us and especially our son, who he viewed as his own.  I have learned a lot about service from those two people.   Their gifts to our family have been  greatly appreciated.

When the ring showed up on my daughter’s hand along with ear-to-ear grins from the happy couple I knew the plans were ticking away in my daughter’s head.  There is a picture taken in my son’s apartment with the  engaged couple in the foreground and my son’s face photo-bombing in the background.  It says it all. So now  the time had come for wedding plans.

I have explained before that our daughter began job application in November/December of 2010, expecting  with the job market being what it was, that it to take a while to get a nibble.  She was interviewed at the hospital in the city where she now lives and was offered a nice job there.   In January of 2011 she moved into the apartment downstairs from our son.

On the outskirts of the city where she lives there is a bridal district.  Quite a bridal district actually, so on her weekends she began the hunt for the perfect wedding gown.  Systematic and focused, she whittled down her selections to a choice few.  At that point she wanted me to come so the final decision could be made.

We breakfasted at a nearby cafe and waited outside the stores until they opened. This would be the weekend of “the decision”.  It was a cold morning and we stood in the sun in front of windows full of billowing satin and tulle.

The first dress was nice, as was the second.  I watched her body language and posture to see what she felt about herself in the dresses.  Either of those would be nice, but let’s look at the others we decided.   We crossed the street to the next store.    I sat waiting – watching other girls emerge from the dressing rooms frothing in white and off white. Strapless seems to be a big seller these days, but I will tell you, confidentially, there are some strapless dresses that should not be made in some sizes.   Large bosoms cradled like giant soft serve ice cream in a cone appear more like an architectural feat than a wedding, just saying . . .

The first dress she sailed in wearing this time was by far the best yet.  It moved nicely and you could tell by her posture that she felt really nice in it.  The downside for her, “It doesn’t feel like a wedding dress!”.  There was not much crinoline underneath the dress to hold it out and give her that “swishy” feeling.  But this dress was a contender.

On to the next shop.  This one was across the state line.   The building for this shop was a bit newer than those we had visited earlier.   The lighting was good and they had a sort of stage with lots of mirrors and seats for the mother’s and family to lounge in as the audience.

The first dress she had selected at this shop was very pretty.  Thunder, they are all pretty and she being as lovely as she is, tall and thin makes any dress look good.   The second dress . . . I could tell the moment she walked out was “the dress.”  Softly draped and moving like a dream she barely touched the floor as she waltzed  in.  I know she had saved the best for last.  Her decision had been made long ago, but she had to work the process.

Dress now decided on it was time to make other plans.  Where to have the wedding.  Our daughter has always wanted a church wedding and so we looked for a building.

Unfortunately many of the church buildings do not have a center isle.  They use three sets of pews so the aesthetic is not quite right.  First here and then there we looked.  Also, high on priority was where to have the reception.  We could do it in our yard – rent a tent with all the trimmings.   Lots of ideas were being tossed around.

Once I looked at prices for tents and how much work we would have to do to get that all together, that idea became less and less appealing.   A bit frustrated and overwhelmed, I discussed my frustration with some friends while at a luncheon at a nearby country club.   “Why not have it here?” one of my friends suggested.

“We are not members here.” I said.

“You don’t have to be!” she smiled. “Let’s talk to the event coordinator.”  And we did.   Within a week, we had a chapel and a reception venue, thanks to my friend.  Amazing.

Then July came and our son died.  I bleakly asked his sister if she wanted to postpone the wedding.  “No,” she said, “I don’t think he  would want me to.”

My friend who had made all the wonderful wedding suggestions lost a daughter a number of years ago.   Her daughter was her oldest child  in her early twenties. My friend also has a son who is now married and lives in house down the hill from their own.  As she had with the  joy of the wedding she now came to my aid  with this tragedy.  I know it was painful for her to revisit her own grief, but she came anyway.

My husband is struggling with what to say at the reception.  His heart is so full and he is such a tender man.   Men are at disadvantage with emotional issues.  We don’t give them the space they need at times to work through all the issues they must deal with.  He has more support from the women he works with than from the men concerning our son’s death.  I don’t know how to remedy this for him and other men who are experiencing grief.  But we will all be operating at an emotional disadvantage.

I am working on my own strategy for how to be present for this auspicious occasion.  I have to say again, and just get it out there and off my chest  that there was a time back in the year 2000 that I did not know if my daughter would live to see this day.   There was also a time, before the year 2000 when our son was in his Marilyn Manson phase that I thought if our daughter ever married her brother would dress in black and be a bridesmaid!  I may use that image to keep the tears at bay.

The fact that he will not be in the wedding party holds true for this weekend and all weekends to come.  We can’t change that.  And that really sucks.

Those attending this wedding deserve a big thank you.  They know we are still grieving, and they are coming to celebrate with our daughter and her groom and to support all of us with their love.  It is an amazing gift.    The bride will be beautiful, the groom – handsome.  The young people will be giddy and ready for a party.  I have overheard the young teenage girls at church expressing their excitement that they will be attending the wedding.  Wedding presents are appearing.  There is a celebration at hand.

Do you believe in a love at first sight?  Yes, I’m certain that it happens all the time. We will get by with a little help from our friends (and family).  We will celebrate and begin a new part of our life.  Here is to the bride and groom. May your life be full of friends.

Artist, Writer, Walking wounded.
View all posts by pathfinder →
This entry was posted in Coping with the Death of a Child, Death, Family, Marraige and tagged coping, friend, friends, Grief Loss and Bereavement, joy, love, Relationships, Weddings. Bookmark the permalink.