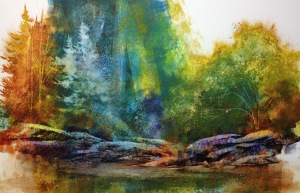 Perhaps this is the tradition now- every year -this time of year -to revisit this particular memory. Four years ago today my son was home. We had just had a storm rip through the mountains. Our power was out and our generator was buzzing. The huge oak tree that stood at the fork of our driveway had spit and half of it lay across the driveway. It had crushed the arbor my husband had built for his raspberries and blackberries.
A couple of years before the same arborist and his company that now cleaned up the broken tree had pinned it together with a great wire. But this best effort was no match for the wind. Another tree was uprooted, tossed on its side. Its skirt was hiked up exposing its roots and dirty bottom.
The noise of the generator and the chain saws made the dogs nervous. My son said, “let’s go take a hike.”
I was still nervous from the storm and the oak tree made me cry. I fished for excuses not to go. “What if the roads were blocked?”
My son scowled, pressed his lips together “come on,” he said, “it will be alright. If it is bad, then we’ll turn around and come home.” We loaded up the dogs and some water. My stomach churned and I had to stop twice at a restroom on the way. My older Pomeranian was not up for the trip and would have to be carried so she stayed home. We were on our way to Panthertown.
You hike down and in to Panthertown so returning always provides a climb when you are tired after a long day.
Sadie, Asa and Sky in the back seat we drove up and wound our way along back roads that took us in. The sky was blue and dotted with clouds that looked like crumbs left from the storm that had passed.
We stood at the trail head – hesitating only briefly before we began the walk down. Sky was a year old as was Sadie but my son controlled his two better than I did my one. Down into the valley we walked where it finally leveled off by the stream.The path is sandy at times and in the boggy places wooden walks have been provided to keep your feet dry.
The sun filtered through the over hanging trees printing a yellow and green jigsaw on the path. The dogs eager for the trail at first settled into a measured gait as they sensed our intention to press on.
My son knew where he wanted to go.
We arrived at a larger beach by the stream where there is light golden sand and a few stones. The water slides over some rocks at the top gently filling a broad pool. The water was cold, too cold for me. My son rolled up his pant legs and waded in. The dogs were off leash now and hesitated, wanting to follow him. My son leaned down calling them ,clapping his hand gently till one by one they followed.
I pulled out my phone and made a video of the scene. The video is not long enough to suit me now. I always berate myself for not lingering on my son longer. My son had brought a ball and tossing it out into the water encouraged the pups to swim after it. Sadie – the youngest border collie was the only taker. Slender and black like a seal she swam while we cheered her on.
“A good strong swimmer.” I said.
On our walk back towards the car I watched my son as he took the lead. All three dogs were at his heel. They knew who they could trust to follow. I memorized him there, so tall, and thin and strong.
The green light of the tree close over his head, his silhouette against the sunny path. He knew I was behind him. I always had been.
I won’t lie. There are days when I am so weary that I wonder just how soon I will follow him now. I suppose I just cannot see the path as clearly as I did then.
I do marvel that part of him was me. I am constantly amazed by that truth when I see my daughter. I think both my children are the best parts of me and their dad with an extra measure of their own peculiar spice.
Yes, it is a wonderful memory. I never got to rehash that memory with my son. In less than a month after this hike he was gone.
Somehow I keep thinking I will figure out how to do these days, how to equip myself with the tools to staunch the flow. My life startles me at times. What startles me most is that my only choice is to resign myself to the fact that there is no “getting used to” this.

Artist, Writer, Walking wounded.
View all posts by pathfinder →
This entry was posted in Coping with the Death of a Child. Bookmark the permalink.