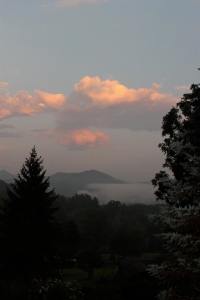 You go to have your eyes examined.  They put you in that uncomfortable chair.  Drops to dilate your pupils and drops to numb your eye are administered.  There is no way to focus.  I hate the numbing drops most, in terms of the way it makes your eyes feel.  Once that feeling subsides and they have checked your interocular pressure the doctor comes in.  He sits very close to you and takes the most blinding light known to man and looks into your eye.  You are supposed to focus on some other point out there in space and try not to blink.   It feels like the light will burn into your brain.

I had my first eye exam when I was 40.  I noticed when I was reading or in front of the computer screen that my eyes did not focus very quickly when I looked up.  I had excellent vision until I was 40.  Now I wear bifocals.   Without them there is no point that is in clear focus.  My right eye is slightly worse than my left.   I keep my glasses right by my bed and put them on as soon as I get up in the morning. I don’t like the world to be fuzzy.

I know you have caught on to my analogy fairly quickly.   My world is far from being in focus, but it is clearing up in some strange ways.

I rode to the nearest “big” city yesterday.  There was patchy fog.  At one point on the four lane everyone had to slow down.  It may have lasted for two miles.   The mental fog is patchy around here too.

I was numb for a while.  The numbness has started to wear off.  The bright light still burns right up close yet I am learning to concentrate beyond it.  Sometimes I can’t help but stare right into it.  It is very painful.  Sometimes it feels more like a spotlight and sometimes like a laser pointed right at my brain.  It makes my head ache.  I feel like there is a vise on my temples.

Back to the fog.   It rolls in unexpectedly.  It is cold and disorienting.  It blurs the edges and shapes of once familiar objects.  I feel like I want to crawl back into bed and wait for the sun to burn it away.

The extremes that my feelings swing through with these elements in my life make me dizzy.  The change is the only thing that is constant.  My emotions and ways of trying to cope have changed in the past 6 months.  I am trying to loosen my grip on some of the pain.  I allow joy to hug me, but  am not very quick to return the embrace.

When my daughter was in chemotherapy we knew three other children in treatment that did not survive.  One was a contemporary of my daughter.  He was the kindest most generous young man you could ever meet.  He had lost a leg to osteosarcoma, but he he always had a smile on his face.  I danced with him once.  We were at a teen cancer camp and they had brought in a D.J.  I was allowed to go as a chaperone. He was wearing his prosthetic leg.  We swayed gently to the music and he talked about what he wanted to do when he grew up.   As the disease progressed he became bed ridden at home under hospice care.  He and his brother were being raised  by his grandmother because his parents were both dead.  His request-his wish that was going to be granted by a wish foundation-was to have a party for his grandmother. He said she had done so much for him and he wanted something for her.

There was also a beautiful little girl who was in treatment for a brain tumor.  She would come in to the room with her floppy brimmed hat warming her little bald head ,eyes shining behind her glasses.  She sang songs and never departed the hospital room without telling my daughter to “sleep tight and don’t let the bed-bugs bite”.  When my daughter’s treatment ended this little darling came to the end-of-treatment party and sang happy birthday.   Out of the mouth of babes.

I did not attend either of these funerals.  We were out of town when one occurred and the other we did not know had happened till after the fact.  The one funeral we did attend was for a child I did not know so well.  Rhabdomyocarcoma ended this life. I remember the slideshow and the songs at the funeral.  I remember learning that the mother was pregnant.  I thought her very brave.

My daughter survived the treatment she received.  Our family survived, though not unscathed.

All these  memories creep back in with the fog.  I am not prepared, yet, to sort them out, if indeed they need sorting.  I can’t make sense of it.

The other dream was also about lines.  One was so thin you could not feel it between your fingers and one so large you could not measure around it.   Both dreams were very frustrating.

I have thought about those dreams many times in my life.  I think the line is my life.  The endpoints not visible to me.   I keep trying to measure, focus on and evaluate different portions, but they will not cooperate.   There are some very important things that are so intangible I cannot find a way to pick them up and there are some things that are so large, I have to learn to accept the fact they cannot be measured and just put up with them.

We talk about life being a gift.  I am struggling to figure that out.   We are not asked if we want it.  We have very little control over a large part of it.  We are not allowed to keep it.   Strange gift.

Most people I know just try to make the best of it.   Staring down the bright light focused on their retina, turning on their fog lights and plowing through.   They are up there balancing on that wire walking towards the end that always stays just slightly out of sight and it keeps on vibrating.

I really wish I could go back to taking everything for granted.  It was much simpler.  I eased back in to it as my daughter grew stronger after her chemotherapy.  I wish I didn’t need glasses.  I wish my son were still here to talk to.   I wish life were more orderly and predictable.  I’ve known it wasn’t from a very early age, but back then I just shut my eyes when they came at me with the light.

Artist, Writer, Walking wounded.
View all posts by pathfinder →
This entry was posted in Coping with the Death of a Child, Death, Family, Friends and tagged funeral, hope, joy, Relationships. Bookmark the permalink.

3 Responses to It is life