I took my dogs to the vet today.  Sky the mini Australian Shepherd  is enrolled in a “courteous canine” class.  He is 19 months old now.  Ebby our pomeranian is in her 12th year.  I was nervous to go to the vet.  We live in a very small town.  I had not visited her since our son died.  When I last saw her we talked about one of his dogs, the dogs that now reside with his sister.  The one we were concerned about, Sadie, is much better.  When my son had her she had little interest in food.  With my daughter all that has changed.  Sadie seems to prefer females.  Asa, the older of the two border collies has adapted well. Our son has trained him to do many things. My daughter still practices his “tricks” with him.

Our son and daughter had lived in the same house, in different apartments for 6 months before our son died.  When she came home from work the dogs would start barking because they recognized the beep of her car horn when she locked her door.  They knew that she would let them out and play with them until her brother came home.  The transition for them after his death meant that they got to move downstairs permanently.  Sadie started eating properly.

I can project all sorts of things on those dogs.   I wonder if they recognize the smell of our son and look for him.   I don’t know much about the psychological issues of dogs.  I know that having the dogs has been a comfort to us.   Sky was just a little over a year old when our son died.   I wish my son could see him now.  He would be impressed with how smart he is.  Our son helped us pick him out.   It really is our son’s fault that we have this dog.

I was nervous to see the vet because I knew we might have to talk about our son’s death.  She said nothing at first.  When she asked if they had been getting some of their medicine regularly I had to admit that I did not remember the last time I gave them their meds.  I said, “you probably know my son died in July.”

We talked about the dogs .  I was able to mention my son’s name in sentences then.  My voice did not even catch.

I also have had my hair done again.  This is the second time since my son died.  I had taken him to get his hair cut by my hairdresser about a month before he died.  I had been to see her the day before the accident that claimed him.  It was hard to go back to her.  We had talked about him that Friday, July 1st.

That may sound a bit crazy to some, but it is an every day challenge now to get on with some things.  It is a challenge to 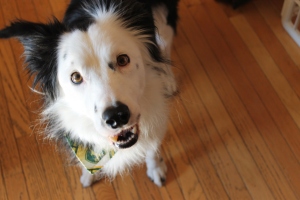 decide if I am willing to take part in what used to be, commonplace occurrence, in this new state.  There are those faces that you have to look at.  They are usually guarded and you can tell they don’t know what to say.  Some people want to rush in and hug you.   I find that the most uncomfortable.   I think those are the people who must rip off bandaids and jump into the deep end when the water is still a bit cold in the pool.  It is okay if they are someone from whom you usually receive a hug.  It is the acquaintance who decides that this circumstance merits their giving you a hug that are off-putting.  You find yourself murmuring, “it’s okay” or “I’m fine.”  We are forced into lying.

I dreaded going to the hairdresser and the vet.  But I am over that hurdle now.  I will take one of the dogs back in three weeks.  No big deal.

Living has become emotionally labor intensive.   Depression blunts things and causes me to hesitate.   Dread has moved in as constant companion.   All the “firsts”- the first time since he died.   The first time you see someone you have known for a while, the first time back to church, the first time going to the grocery store (in a small town).   The “dread” whispers in your ear that “it could be bad!”

I have passed my first birthday since he died, and my daughter’s.  We got through the wedding, Thanksgiving, Christmas, New Year.  Saturday is his birthday.  I’ve lost a few days dreading that already.  My daughter reminded me that it is just another day, really.  She is right.

We are going out of town, my husband and I.   We are escaping south.   It won’t stop us from thinking about our son.   It will be a bit easier to find a momentary diversion.  The dogs will be cared for by some college kids who will come stay at the house.  It gives them a break from the dorms and our dogs will love being pampered.  I have printed a guide book for our destination.   I am almost beginning to look forward to going.  I am nervous about leaving the dogs.  I don’t know why, I have just decided to make that something for me to have concerns about.

My son always encouraged us to travel.   He thought we were a bit crazy not to do more.   We are home bodies.  We like

where we live in the mountains and it easy to just stay home.   My husbands profession keeps him very busy and often when he has time off he simply likes to stay put.   He and I have decided we need to find a way to go ahead and travel.  Part of the dog taking the course is to make him more travel friendly.   It will make it easier for me to travel if I can take the dogs with me I think, though in truth it may make it more difficult.

The nice thing about our trip is that everyone at the hotel and in the destination will be a stranger.  We have some friends that will join us there for a couple of days.  That is a gift to us.  They have been with us through all this up to now.   We are comfortable with them and having them with us will smooth out some rough edges.

The others in the town will have no reason to look up and dodge our eyes.  They won’t know that our son died.   I can drop the mask for a while.

Our son visited the place where we are going.  He went to a conference there a year or so ago.  He came back here to pick up his dogs on his way back to school.  He told us we should go there and visit.  “Great place.” he told us.

I can’t remember where he stayed or the names of any restaurants where he dined.  I think that is probably for the best.   We are not going there because he had been there.  It is someplace that we were mutually interested in.

This will be our first trip that is purely for relaxation in a long time.   It is another hurdle to cross.   We are timing this one so that we can take two with one jump.

I lost a few days of writing to depression.  I intend to allow the words to fall where they may while we are gone on our trip.   I miss how effortless life used to be, among other things. . .