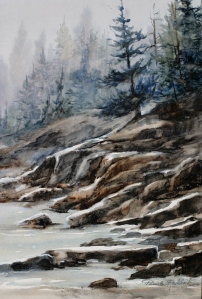 My husband and I traveled the 20 some hours to maine over the course of three days.  We arrived and unloaded our things at the  historic house in Southwest Harbor we have rented.  This is my husband’s first time in Maine, my third.  The first time was in direct connection to our son, the second he accompanied me though the purpose was art.

While in high school our son began to play guitar.  Our daughter had begun piano in the third grade and was very quick and to my thinking had a gift.  At about the same time which would make our son about eleven, he began violin.   Our daughter has stuck to the piano.  Our son gave up violin (later stating how much he regretted that decision) and began guitar, acoustic and electric.  He played along with the high school chorus and with his friends.

He started saying he thought he wanted to be a guitar player professionally.  I don’t know much about music, and the music business but I thought as I had before in so many other situations in our children’s life that we ought to figure out how to most effectively explore this possibility.  He spoke of Berkley School of Music in Boston, Massachusetts.  Even in those ancient days I had internet and I found the website for the school and that they had a summer program in music for high school students.

I talked with my husband and after a short effort in convincing we asked our son if he wanted to go.

The week at Berkley was not inexpensive – but less expensive than it might become for him to begin to pursue music and find it was not for him.

A friend of mine and I accompanied him on his flight to Boston, rented a car and got him situated in the dorm.  Then she and I headed north up Route 1.  We stopped at the welcome center at the state border and using brochures she and I picked our path based on the lighthouses and bed and breakfasts we could find to stay in.  Before the week was out we had wandered our way to Prince Edward Island and back eating as much lobster as we could hold.

My son loved the school.  He and his friends helped another friend who was short on funds because of miscalculation by the parents to panhandle and raise money on the street – playing for change.

His conclusion after the week was that he would continue to play guitar- for fun.

The second time we traveled to Maine was a road trip.   Another friend and I wanted to attend an art workshop in Stonington,   We rented a house in Stonington, but arrived early enough to spend a couple of days in Bar Harbor and visit Acadia.  My son and I shared the driving responsibilities.  We did the trip in two days.  I don’t remember it being as tough a drive as my husband and I experienced this time.

My son, friend and I marveled over the rocks and waves of Acadia.  I could tell then that my son longed to climb in that area.   In Stonington he found a rock quarry and visited there to practice on boulders.  I have too many memories of that trip centered around him to recall here. It was a good trip, made all the better by his presence.

The trip here this time was in the planning stages before he died.  He and his dad and I presume, our daughter, were planning a trip or at least talking about it.  I have never heard what the plan was.  At this point it does not matter.

I can imagine him here with us.  I can construct that image out of memories.   I imagine him with a cup of tea impatient to begin the day, perhaps already out exploring the town on foot.  My daughter would want to sleep in or maybe strike out with him.   I am not going to dwell on all this this week, but it cannot help but come to mind.

I really cannot believe he is gone.  That is always the bottom line.   He is just around the corner out of sight.

I am glad those who have not suffered such a loss are so naive as to be able to think you must move on and “get over it.”  I am glad the human mind is not capable of truly imagining such sadness.  If we all had to live with the knowledge of how such a possibility felt we would probably stop in our tracks. We would build a bubble and retreat with our loved ones inside.  So I am proud of any of us who have suffered this loss when we are able to progress through a day in a reasonable fashion.  I am patient with those who can’t focus yet.  It will come slowly with time.

I am a little cog in the whole mechanism of life.  A tiny speck.  My contributions I make partly because of the expectations of my husband and children.  Just because my son is not here to goad me on does not mean I will ignore his previous admonitions.  I reserve the right to take my time.

I lived with this person in my life for 29 years and 4 months plus the 9 months he grew inside me.  I miss him and I appreciate those who though perhaps uncomfortable with me allow me to miss him anyway.

We have friends who will join us here either tomorrow or Tuesday.  We are in a rambling old house built in the 1800’s and owned by 6th generation family members.  It has creaky floors and oddly laid out rooms.   You can look out the window at part of the harbor and just down the street you can buy lobster by the pound.   We traveled all these miles to be in this vastly different place – dogs in tow.  We packed a few clothes and possessions but the main thing (pun intended) the important things always and forever are in our heart.  The love of our family.  It permeates us.  So it is not a time of escape, it is in many ways a time of return.

We miss you son.  I miss you my sweet daughter.  I hold you close  in my heart today and think good thoughts.