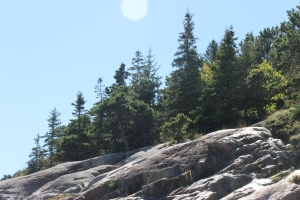 The dogs are up even earlier here on the coast of Maine.  The sun rises an hour earlier than it does at home, and stranger yet they seem to prefer 5:30 a.m. to begin their day.  The first day here I rose to let them out and settle them down again and this morning my husband took his turn albeit begrudgingly.

We finally left the house after a slow start ourselves around 11:00a.m.  We drove into the national park Acadia, using the pass my husband procured yesterday as a senior citizen of 62.   He was impressed with the scenery.  We drove up on Cadillac Mountain and walked the little loop trail at the top.  It was a clear day and the sky a bottomless blue.

We stood and looked out over that vast scene.  “Did ‘he’ come here with you?” he asked referring to our son.

We drove on to the next stop, the sand beach.  We were able to take the dogs there because of the season.  My husband stood and looked at the rocky hillsides that embraced the little cove and short strip of sand.

“Up there,” I pointed to the right, “he climbed up there and I took his picture.”

“I know that picture.” my husband said.   “He is standing with his arms crossed looking out at the water.”

I held back my tears but my husband could not.

It was a big step for me today.  Not a step further away from my son, but a step closer to some common thread that stitched us together.

I wondered what my husband was thinking as I approached the rocks.  I knew he wanted to climb up where our son had once stood.

Later in the car, he said, “You could take my picture there and then photoshop the two together – me with him there on the rocks.”

There is a strange guilt I have that I store so many memories of my son within my heart.  I spent a lot of time with him.   I know my husband wishes he had spent more time with him.  No one can fix that now.

I don’t think in any family there are any even or equal relationships.  Every relationship is as different as the individuals involved.

I wish I could for my husband’s sake go back and put him in the picture with our son in lots of the places and situations my son and I found ourselves in.  In almost all of the pictures of my son, I was the one behind the camera, the one observing him as he went.

If I could figure out a way to photoshop my husband in to the picture on the rocks I would do it.  I would regardless of the fact it does not change a thing.

There are some pictures I need to pull out and put together for my husband, if that is what he needs. There is one in the yard with our son in his arms eating an apple together.  There is one on the monorail in Disney World where they are talking intently.  There is one on the couch with them laughing.  There is one on the beach with them fishing.  Later there are mopey teenage pictures and ones where a face is turned trying to avoid the lens.  My favorite one came years later  on the deck of the beach house at Surf City that we used to own.  Arm around his dad’s shoulder they stand side by side smiling heartbreaking smiles of such happiness.

I got the best part of all those pictures, I know, whether I meant to or not.  I got to take them all.