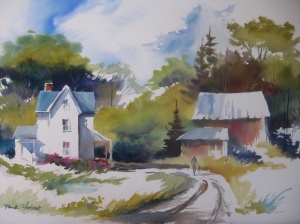 I was asked this weekend, “why are you crying?”  The person asking me was a good friend, and well aware of the circumstances of the past few months.   What was not clear to them, from their perspective is why I had tears.  The things we had been talking about were not particularly sad in and of themselves.  We had just learned that our son’s PhD had been awarded posthumously, that the department’s memorial in his honor  had been well attended, that his diploma was framed and we would receive it soon.   It was all in honor of our son, our brilliant, loving, cherished son.   So, why were we crying?

Tears linger very close to the surface for me.   I have seen the new swimming pools whose  drain systems have been done in such a way that the water is level with the surface of the walkway that surrounds it.  When the water is still it looks like you could step right out on to it.  I feel like I am one of those pools.  It is only a step from solid ground into the tears.  It is as easy as mentioning our son’s name, or picturing his face, or seeing a red-tailed hawk sail across the road into the trees.

We went to the gallery to see the show where it was hung on display after the presentation ceremony.   It was close with all the people milling around searching for their painting and viewing the other work on display by their fellow artists.  I walked and looked and suddenly it was all too close, too tight, too many smiles and people fawning over each other complimenting while searching for their own painting out of the corner of their eye.  The only people at the show for the most part were people in the show and their spouses.  I felt like I would suffocate.   We had a drive ahead of us and I needed to get out.  The tears came as I started to the car.  My husband saw my expression and feared that maybe someone had said something, or something had been done to upset me.   “It is just me,” I said as I tucked it all in again and we headed off for our 5 hour drive.

The sudden fleeting thought that my son was not here to call was all it took.

I am peeling an onion the size of the earth, an onion by the name of grief.   I peel back  layer upon layer of joy and sorrow, triumph and disappointment.   The tears are a natural part of the process, sometimes confusing me because they come at times when I was not expecting them.

One of my husbands colleagues talked to my husband about the loss of his brother so many years ago.  He told my husband that his mother cried every day for the rest of her life.   At first I was shocked to hear this, afraid that I may have that many tears to shed too.  If I expect each day to hold some joy, am I so naive to think it will not alternately hold some sorrow?  The tears are not a constant thing though indeed a close companion.   They do not debilitate me for long, however crushing the feelings are at times.

There are many memories concerning my son over which I can smile and even laugh.  I have not found the balance yet but I am willing to search.   The tears no longer frighten me, even though they frighten and confuse others.  Like yawning, it can be contagious when witnessed and uncomfortable for most people because it is not an activity most people participate in on a daily basis.  Except for a few of us.  One of the water’s of life, that binds us together, that all drink of eventually in ways big and small.   It is our lot, our onion, our ocean depth, our explicable salty sea in which we will swim until we can swim no more.

Artist, Writer, Walking wounded.
View all posts by pathfinder →
This entry was posted in Uncategorized and tagged coping with death, coping with grief, cry, death of a child, family, grief. Bookmark the permalink.

2 Responses to Peeling an onion