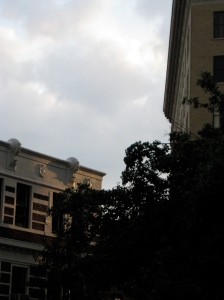 Barring weather and unforeseen events the wedding happens next weekend.  My daughter sounds a bit tired.  It is hard to maintain the level of excitement that I know she feels when she still has to go to work and  clean and cook.  Her apartment is the downstairs section of an old house that is over one hundred years old that  we purchased when our son started graduate school. It is within walking distance of the University and very convenient for students. He saw it as  “just a place to live” initially, but I think the old house grew on him with time.   Our daughter fell in love with it when she moved there in January.

Our soon to be son-in-law took a job in the same city where our son was in school. He moved up to begin his work, proposed to our daughter, who accepted his proposal. She began a job search expecting it to take a while to secure a job. It took only a couple of months to find a job much to her surprise.

She asked her new employer if she could wait until after the Christmas Holiday, since her current job as an events coordinator for a large resort needed her to finish out the holiday season.  They agreed.

As landlord we wrote a letter to the student who loosely occupied the downstairs apartment of the house.   There was not a lease so we gave her thirty days notice. She seemed happy to comply.

Our son had been telling us that he thought there might be some rodents in the house.  Living in a tight old neighborhood it is one of the perils that one must face.  There had not been much activity before, but apparently the downstairs renter was not very tidy.  The house also adjoins a lot where there is a large apartment complex and I suspected that there had been a fumigation of the property with all the rodent residents making a mass exodus.

Our son told us that one night while on the stairs something large had passed him in the dark.  I told him to begin setting traps.   He put a board in the large gap under the basement door.  In the morning he found it had been moved and gnawed on during the night.

In the meantime I decided in an effort to make the transition to a new state and city a bit easier for my daughter. We would rent the U-haul trailer and I would “move her” to her new home.   Our son said that he had done “some cleaning.”  While she was at work finishing up her final days  my husband and I packed the trailer and parked it in our driveway.  The next day she and I drove our truck, trailer in tow.

There was snow on the ground when we arrived.  I decided to retreat upstairs to my son’s apartment while my son, daughter and her fiance unpacked the trailer.

There was much cleaning to be done and evidence of rodent activity, complete with a hole that had been gnawed in the floor in  one corner.  Apparently the young woman who had lived there had dogs and lots of dog food available for all animals to eat.

That night we put out poison.   Traps were set.  A battle was going to be launched that would take several weeks to be won.

I do not know how many rodents were exterminated.  One by one, my son and daughter would report  their progress.

Our daughter fell in love with the house, finding old woodwork, old tile, doorknobs.  She researched the original owners of the house.  She mowed the grass which her brother was loath to do, repaired, spruced up and cleaned.  She and her fiance fired up the grill on the back porch and cooked out.  She lived there six months with her brother upstairs.  His dogs began to recognize her car when she drove up.  She had access to them whenever she (or they) wanted and took them out to play and walk.

It was so wonderful to have both our children under one roof, even if it was five hours away.

The 4th of July weekend when our son died, his sister and fiance were on their way down to stay with us too.  They were driving here on the day he died.

She still lives in the house.  We asked her if she needed to move, that we could sell the house.  She wants to stay.  Her fiance moved in upstairs.   She needed to hear someone moving around up there, and at this point their plan is to live in the house after they marry.  She has the dogs now, her dogs.   Dogs are great at adapting and have come to own her completely now.

She packed up our son’s things, though some books remain and all this furniture is there.  It was always a random assortment of “early attic” furniture anyway.

Every now and then she has to set a trap upon seeing some unwelcome guest activity from the local varmints.   It is one of the things you must put up with when living in an old house, in an old city neighborhood.

When her brother was still living there, he would out of guilt,  come out and offer to help her in the yard.  He never stayed long or put too much effort into it, but at least he offered.  He loved having her there.   I would have loved to be a fly on the wall to have overheard some of their conversations.   I love how they loved each other.

I am so proud of my children.  I can’t say enough how much I appreciate all that our daughter took on after her brother’s death.

I want for her to have the life she wants.   I know she wants security, affection, attention and acceptance from her husband.  I know that she has many talents and can do anything she puts her mind to.  I know that she wants children, and will be a wonderful mother.

When I married and left home, there were not the attachments present that she and I have.  Time will loosen some bonds as she and her husband and hopefully children become a unit.   I look forward to watching them grow.  The time has come for me to step back a bit more and give them lots of room to be who they are together.

I marvel at how strong she is.  I have not been back to the house since our son died.   I remember moving him in, in the heat of the summer.   But, I won’t go there right now.

Our daughter will marry next weekend.   Her dress hangs in the guest room.  She is going to be the most beautiful bride.   I will remind her to set some traps before she leaves to come here for the wedding though!  No need to return after the honeymoon to any unwelcome surprises!

1 Response to Mice,rats and life