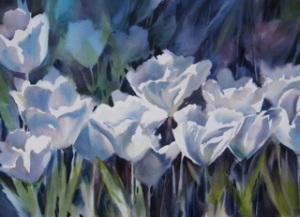 If can be a conjunction or a noun.  I really don’t want it to have any more space or time in my vocabulary for now.   Not that avoiding it changes anything, but a lot of my intrusive thoughts start with if.

The speculation that occurs following that notorious two letter word can go on for hours.   It has the ability to stop a day in its tracks.  I want to turn that word around and send it packing.  I want to get out of the valley of the shadow of if.  What really annoys me is that life has an if in the middle.

See, it is right there.  Choices hinge on it minute by minute.  Monty Hall capitalized on it early on with his “Let’s Make a Deal” and every successful game show out there on TV relies on its fulcrum to tip people into rapturous tears or disappointed sorrow.  If you make the right choice.  If.

To be such a small word it certainly drags a big load behind it.  That load is usually named guilt, adding “only” to the end, if only.  I borrow the phrase and present you with , “guilt is the gift that keeps on giving.”  Did you notice, gift has an if in it too.  Do you accept your gifts? Do you use your gifts,? Do you abuse your gifts? If you use them correctly you might go far – if.

Conditional so-and-so  that word if.  A word upon which we can set up hypothetical equations for the the entire universe.  Because if this is true, then. . .

We are all gamblers at the slot machine of life.  Pull the handle and if the right emblems line up then we get the pay off.   Contractual agreements hinge on it.

Countries line up their monopoly pieces on the table and squabble over it.

What do I get out of this “if” we-fill in the blank.

What an annoying word.   We use it so much we don’t even notice it.

If I have to tell you one more time, we threaten our children.  If you would just listen! As if !!!!    If I were only taller, prettier, smarter, slimmer.  If I only had more time.

Yes, if I only had more time.  Wow that one packs a punch for those of us who have lost someone we love.   But even that would have to be conditional because we would have to have known that the loss was impending to make the time what we think it could have been – if.   The if falls out there, doesn’t work.  We cannot go back or change a thing, and if we could we probably would not be able to, because we did not know the death was coming. We would behave as we always did.  We did not know for sure, even in the face of illness we hoped – if the doctors could just do the magic thing.

My son died. I could go through the scenarios of if’s for you, if that would help.  It does not.  Things are the way the are now.  I have no choice in the matter.  My choice is in how I choose to proceed.  The choices are made on a daily, hourly or minute by minute basis.  Actually to be more precise, they are made on a second by second basis.

Probably all accidents are preventable, if you take the time.  Slow down, check your surroundings,  get someone to hold the ladder, watch your step.  All of this we see it in hindsight.   We get by once maybe and we get sloppy or something just escapes our notice, something it might have taken a moment to fix or change, if we had only.

Too late.   If walks away shaking it’s head.  “I could have told you so” it whispers.

So what can I take from this, perhaps ust a reminder for myself.

I am cutting the guilt loose.  It is a millstone that wants to pull me down.  It’s tether is that little word if.

Believe me if any of us could have done anything to have prevented our current circumstance, we would have, gladly and at any expense.

If I let the “if’s”  of the past invade my day, all day then I do not move forward.  If I see something that needs to be done, like give someone a pat on the back, or a kind word, or a hug,  and don’t act on it then I have wasted an opportunity that might never come again and give guilt another foothold.

If does not want you to live in the moment.  It wants to undermine your courage and distract you from what is right in front of your face.

If probably was coined by the devil himself, if such a being exists.  If is the father of lies because it is speculation, seductive and insidious.    There is so little time.   I don’t want it to be full of the “if’s”.   I may only be able to change that a little bit at time.  I still have the ability to choose.

Sometimes I shout out loud to the intrusive thoughts.  I tell them to go away.  They are imbedded in my mind, I have no choice in that, but  I don’t have to let them take my mind off the things that are still here.  The people that are still here with me.

The thoughts may grab a moment here and there and dump me into tears, but I can pull back – it takes a lot – but I can.   It is worth the effort.  I don’t want to miss a moment with anyone else when given the opportunity, if it is within my ability.  See, I used it.  That was not so scary.

Artist, Writer, Walking wounded.
View all posts by pathfinder →
This entry was posted in Coping with the Death of a Child, Death, Faith, Family, Friends and tagged coping with death, coping with grief, death of a child, friends, Grief Loss and Bereavement, Happiness, hope, if, illness, joy, loss, Obsessive–compulsive disorder, Relationships. Bookmark the permalink.