Posted on December 2, 2011 by pathfinder 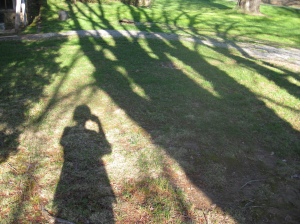 I have gone blank this morning.  It is December the 2nd.  Officially five months.

Yesterday, for whatever reason, I did not end up in tears until the end of the day, in bed.  It is like I cannot go to sleep unless I shed a few tears.  I wondered over whether it was force of habit. If it is, I wonder why, when I break all other  habits so easily I cannot break this one.  Not that it is a bad habit, if it is one.

I thought again about the issue of control.  I thought about perception.  I can’t change anything that happened a second ago.  Oh I can hit delete and these words will disappear but that is a new action.  It erases what my fingers did just a second before.  This is the only moment that exists, and now this one.

I can see why people get caught up on wanting to debate the perception of time.  There is a new movie out (that I doubt I will rush out to see) about time.  There have  been lots of movies about time.  “The Time Travelers Wife”, “Peggy Sue Got Married”, “The Time Machine” – and others where an adult gets to go back and changes something.  Then of course there is the quintessential “A Christmas Carol” and “Its A Wonderful Life.”   There appeal is that given the right amount of information, magically, we can be made to consider what we have and become more generous, loving, appreciative people today.  I wonder how long it takes to wear off?

Everything wears off eventually.  You get old enough and even the need to live wears off.  Gold wears off your jewelry.  My mother’s wedding band got so thin it had to be rebuilt.  Everything erodes.  Geologically the earth is one big recycling bin, the building up and the wearing down.  The minerals in the subduction zones  taken down and being spewed up again pronounced by the newscaster standing with his mike to be new earth.  It is recycled and it will erode.

I am sounding rather gloomy in my blank thoughts.  Perhaps I should be taking comfort in all this.  Is the earth a closed system?  There is debate on that.

It is astounding to think that everything we have has had to come from something else, some raw material, manufactured using something that was available or discovered that when combined with something else made this or that.  Amazing how much mankind has figured out.

We can save lives.  Just not all of them and even when do for a time they eventually die anyway.  They wear out, life wears off.

Our pets die.  During my lifetime I have had or my family has had combined ten dogs, three cats and one parrot , two cockatiels and a parakeet.  Two of those dogs are still with us.  I am not counting the dogs that now live with my daughter.  Those are not my dogs.  That’s an average of one dog every 5.7 years for the statistician.  So out of the ten, I have experienced the death of eight.There were some overlaps, cats with dogs, dogs with dogs, dogs with birds. Some people think that giving your child a pet and allowing them to experience the eventual death is a great life lesson.

Erosion in nature takes place with wind, water, freezing water, lichens and plant roots abrading, breaking apart and sanding down the rocks and earth.   Erosion of the spirit takes place when opportunities are missed, praise is withheld, criticism is heaped up, or we passed unnoticed or ignored.

Where the big oak came down in our yard, right before my son died there is a big gap in the landscape.  The roots are still there, holding on to the dirt, but when they decay there will be a big gap and potential erosion of the soil that could undermine the driveway.   We have to be proactive.  We know what the consequences could be.  It is predictable.

I miss that tree.  It was a beautiful thing.  It provided shade and acorns for the squirrels.  Its absence mars the view.

We have built no memorials for our son, somehow the lack of that tree serves as a constant reminder, as if I needed more, that he is really gone.  He was here when it split in the wind, and when they took it down for good, he was already gone.   I wept all day over him and the tree.   Yes the roots are still there for now, the roots of the tree and the roots of my son’s spirit, deep in my heart.   We will deal with the tree and will probably plant another in its place.  A river birch has been suggested.  Maybe in the spring we will plant one.

I think if there is any erosion going on, I can take the particles and with some inspiration form them into something new in my head, in my heart.   It won’t really be gone from the system, it will just smooth out a little, take away the rough edges.

Rougher erosion forces may come in and break off a chunk again somewhere, in fact I am sure it will happen.

I won’t be able to go back in time and fix it, or prevent it.  I won’t be able to cast out into the future and reel in the ramifications and ripples that may be.   Maybe it is the turning and turning of these things around in my head that provides the most eroding force of all.   It’s a habit I can’t seem to break.  I am sure time will tell.