Each in his own way 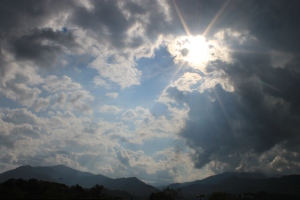 Is there sin in sorrow? I cannot fathom this could be believed in Christianity since Isaiah 53 says in the foreshadow of Christ that he is a man of sorrows.  Yet in the world at times we who dwell in sorrow are sometimes singled out for unwarranted criticism.

Yes we still get hit with the phrase from (I assume) well meaning folks that we should be able to “get over it.”

I have thought about this a lot.  I don’t think I have “gotten over” any person who had an impact on life.  Not even those with whom I had a short acquaintance but who also imparted something that helped me grow.  No, I have not gotten over any of them.

Why then do people feel so uncomfortable about those of us who have lost a beloved child when we cannot “get over it.”    The discomfort comes from some other source that our sorrow triggers in them.  Anyone who has experienced trauma as I have, and as so many others have, seem alien in many ways.  We are outside of what most people think is normal or the way things should be.

Perhaps those who believe that God is punitive believe that we are being punished.  Something we have done has warranted the tragedy and therefore association might bring about something bad in their lives.  Perhaps they like Job’s friends want to warn us away from our path less something else befall us.  Well, from experience I can tell you,sooner or later something else will happen.  It is the way of aging, the paths all of our lives eventually lead to and the chance we take in living in a world where there are natural laws.

It was not God’s will that my son died.

On the news there was the report of a beautiful young lady who recently died as a result of a lightening strike.  She was about to graduate and from the report was an amazing young woman with so much to contribute to our world.  Her dad was quoted as saying, “it was God’s will.”  As you can imagine under the comments section many weighed in to express their outrage at his statement.  I felt a little incensed myself.

But then I realized, he has the right to view this tragedy in whatever light helps him to cope.  Perhaps it comforts him to think that God wanted his daughter at this time.  If it helps him, then it is none of my business.  I did not view his statement as one in which he was trying to force his view on anyone.  Rather what I pictured was a situation much like what happened to us, where reporters from a local news station showed up unannounced to interview us concerning our son’s tragic accident.  Being in shock, it is hard to figure out what you should and should not say.

I know others who have lost loved ones recently – other than their children.  People of faith who indeed have a great faith and who are also working through their loss.  I remember the early days when I tentatively touched the gaping sore of loss.  On days when the pain subsided a little I would have to test it – and part of me wonders if I wanted to keep it sore.  It was, after all ,the only vestige left of my son.

At this point I would say sorrow is like groundwater, flowing always just below the surface.  Sometimes when the rain of stress , other’s sorrow and just the general everyday “missing my son” happens it still floods.  Yes I am feeling sorry for myself.  If you had met my son you would feel sorry for yourself too.  He was an amazing person.

I feel sorry for myself when I talk to other grieving parents and realize I will not get to meet their wonderful children in this lifetime.  What a huge loss for this world.  Who knows the volume of the potential that has been lost?

As for the grieving, those who are learning to cope with the sorrow they will carry in one form or another all their life – give them a break.  Even if you have experienced something similar you have your attempts at answers, but you do not have ALL the answers.   If you want to take time you can figure out what would provide encouragement for them.   If you can’t do that then just be with them and listen if you can.  Written words are nice, but the spoken word, fitly spoken and perhaps followed by a gentle touch or hug if you are close enough to the person helps more.  But I am speaking for myself, as each person has a right to do.  Though there are similarities and points in which all grieving people can relate but  we are individuals and our grief and sorrow is ours to endure.

Lately I have been considering the fact that death is not the mystery – yet we treat it like one.  It is that point when bodily functions cease.  Life is the mystery.  Confusing, contradictory and full of twists and turns that still ultimately end in death.

There is (for me) no sin in sorrow.  There is a call to empathy without judgement.

Artist, Writer, Walking wounded.
View all posts by pathfinder →
This entry was posted in Coping with the Death of a Child, Death, Faith and tagged Christ, Christianity, God, grief, Grief Loss and Bereavement. Bookmark the permalink.

4 Responses to Each in his own way